I've had some priorities take me away from my electronic pursuits so I apologize for my absence.  Bloblore aka the Bit Crusher, continues to entertain me and confuse my family.  Better to explore the weird and unknown than hang with the mundanes, eh?

Here is a 5 minute clip showing a simple setup. One oscillator going into a 4040 and two divisions from that going to a NAND gate.  The output of that setup then goes to the 4046 pitch tracker.

I use the cd4046 often because it really gives the output of all those ins and outs some mojo; some finality.  It compare it a lot to my other passion, rock n roll.  Ya got to crank that tube amp to get the groove on.  Same idea here; regardless of how simple or complex our patching is, the success lies in the output.

What Led Me Down the Rabbit Hole

One thing I get asked about when people view my Bit Crusher or hear a clip online is, "Why do you want to make such insane noises?".  My answer doesn't get rid of the befuddled look on some faces, in fact I think they grow more concerned about my musical tastes.

I grew up in the 70's watching shows like Creature Feature here in Chicago.  There were other channels showing low budget science fiction and horror on Saturdays or Sundays, but Creature Feature was the King. The strange sounds from creatures from outer space, the blinking consoles from reruns of Star Trek, forever stuck in my head.

I received my first video game unit around the late 70's as well;  a black and white pong style game system.  It was also the first piece of electronic harware I took apart LOL!

Enter the 80's where I was a young teen hooked on arcade games.  There was a time when there were arcade games such as Pacman, Galaga, Galaxian, etc., in every corner store.  I thought I hit the jackpot at JCPenny, which had a very large room on the upper floors dedicated to snatching tokens from pimply kids such as I was.

The mother load was a freestanding building in the far suburbs of Chicago called Friar Tucks.  This place was the mecca of video game life.  All the classics as well as the latest titles were there.  It set the mood right:  low lights and multiple rooms to find your dream machine.  The pulsing beats and blips from that army of game stations pummeled my ears.

And I was in heaven.

That is why I build these lo-fi machines; to recapture my youth as well as to create a weird sort of monument of my favorite things - games and science fiction.
Posted by Draal at 11:25 AM No comments:

I have got to get more patching cords!  Very easy to run short in session.  Been busy doing a number of different projects but I have finally fixed a few trouble spots on my lunetta.  The added 4040 in this example gives me more octaves to play with.  The added 4046 pitch tracker has a pot instead of a fixed resistor on pin 9.
Posted by Draal at 12:25 PM No comments:


Here's a little demo of the 4015 shift register now with twice the flavor.  Two oscillators control the Data and Clock pins of one half of this dual shift register chip.  I take its four outputs and connect them to my R/2R ladder and then feed the output to a 4046 vco.  None of these "modules" are difficult to build and the results are fun.

Are these things ever done LOL! I'll just say done enough for playing with. Here's a quick video showing it in action. Some fit and finish issues remain but I'm just about "there".

I'm using the outs of 2 different dividers to provide "octaves" or channels for the 4078 Eight input NOR gate as well as the 4051. Those go to separate inputs of my mixer. I am also running a patch into the 4046 pitch tracker and have that in another input of my 4 input mixer.

With the small and large cap switches on the pitch tracker I can get some cool sounds that are great variations on the typical beeps we are used to.

Cool Places to Check Out 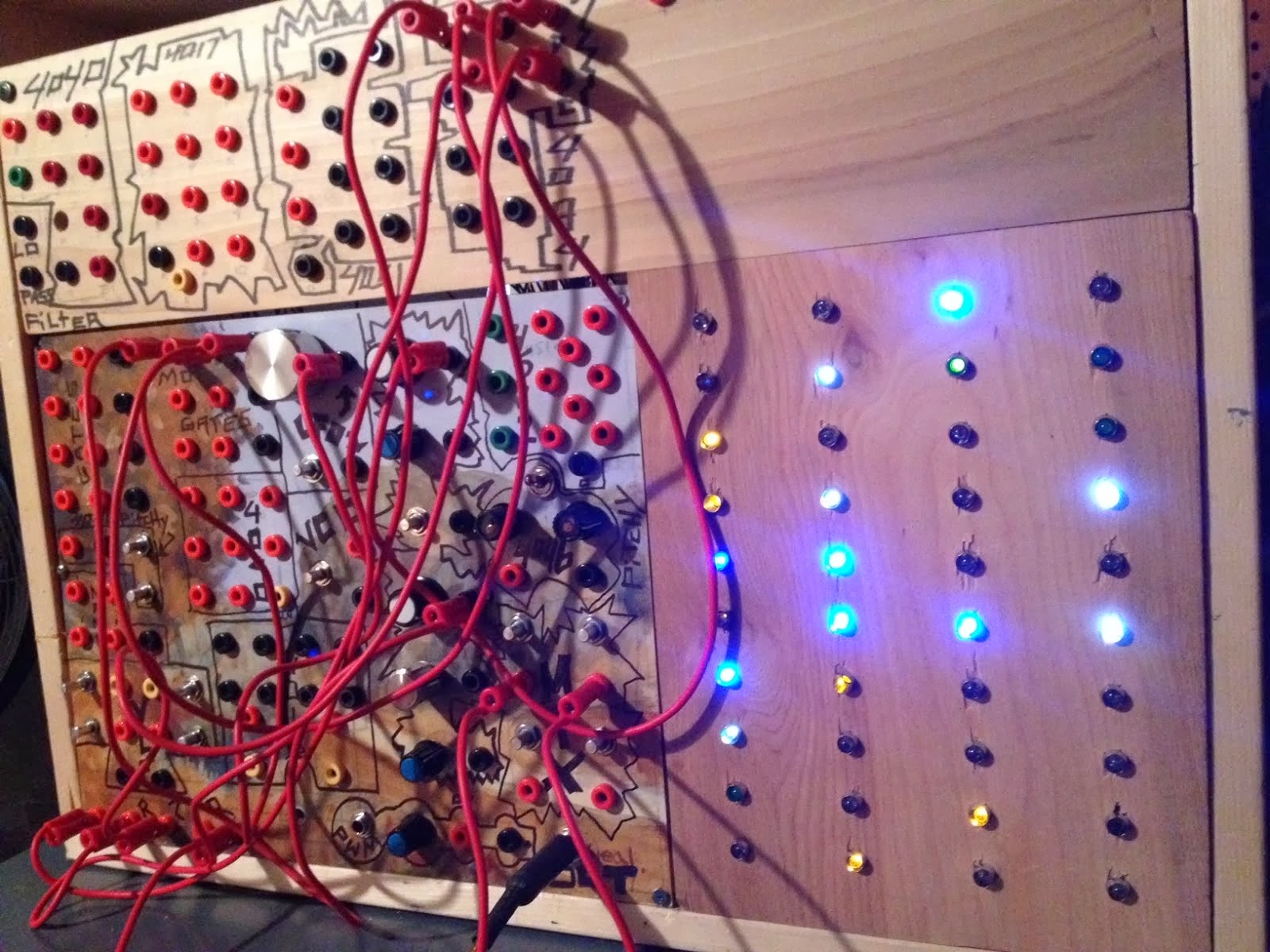